A masonry oven challenges the user to develop real craftsmanship. At the same time, every brick oven develops its own “personality” and easily justifies its place at the heart of any kitchen.

When cast into refractory masonry, clay makes the best cooker.  It radiates a powerful heat that is not harsh (like the heat from metal).

In today’s world, firing with wood is a responsible approach to sustainability

Well-fermented dough for pizza, flatbreads, or loaves, is laid on hot tiles, giving exquisite flavours to the crust with just a hint of wood-ash. 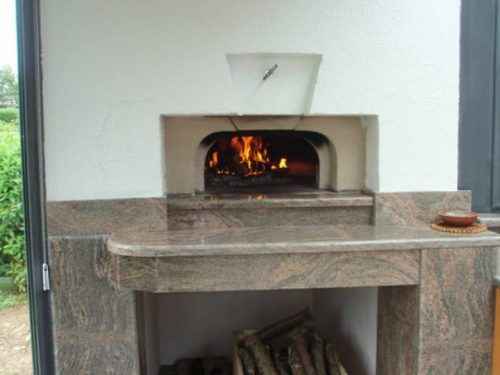 Your Le Panyol oven has substantial tiles on its floor, tiles which absorb the heat from the fire laid right on them.

These hot “sole” bricks give spring to the breads and such a firmly cooked bottom to the pastry of pies and tarts. Baked on the hot hearth, your food neither sticks nor dries out.

The crown of the oven has also absorbed a great amount of heat, and it will radiate this great heat down from the top, with the result that your bread and any food will cook efficiently and swiftly, leaving moisture in the middle.

The unique feature which makes a brick oven the unrivalled king among ovens is retained heat.

During the firing cycle, the refractory masonry absorbs the heat. With the flames inside the baking chamber each major firing lodges a heat that bakers call “solid” heat deep into the bricks.

Having been fired hot, the oven is given a settling down period during which the very hot areas transfer their excess heat to the cooler extremities. When the heat is even, the cooking cycle begins.

This vast thermal mass enables deep and penetrating heat to be radiated in a powerful way without being scorching or shallow in its effect. Masonry radiates heat which is firm yet gentle when compared with the harshness of heat radiated by metal.

Imagine an oven load of pizzas, followed by rolls, then crusty cobs or bloomers laid on the oven sole, to be followed by meats, then slowly cooking casseroles, pastries and rich cakes when the heat is gentle.

At any time the decision can be made to cease cooking and refire the oven quickly to give it another thrust of heat.

No cement, and with no impurities in the clay there is nothing to alter the flavour of your food.

The special white clay of Larnage contains kaolin, giving its rich white colour and, being high in alumina, this white clay has a fire resistance of more than 1630°C.

The white clay comes from the famous Terre Blanche quarry in Larnage, near Tain l’Hermitage (Drome). The quarry belongs to Fayol, the parent company of le Panyol, and is currently the only one of its kind dedicated to this use. Since the Roman occupation the heat-resistant clay has been known and valued, and has been the preferred material used for bread ovens since 1840.

Click here to learn more about this remarkable firm and its special clay.